The history of Bubble Shooter 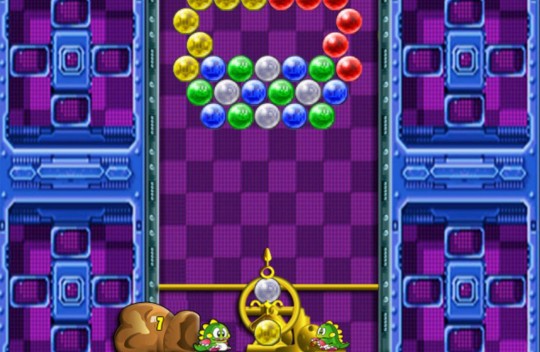 The history of Bubble Shooter began to be written in 1994 and it still seems very far away from its final chapter. This simple puzzle game has defied common sense ever since it was created by becoming a widely popular game worldwide with one of the simplest gameplays out there. To aim, shoot, and pop the bubbles is all there is to do and yet the addictiveness of this game is undeniable.

The early beginning of the history of Bubble Shooter

The history of Bubble Shooter begins in the ‘90s, Japan, by the hand of Taito Corporation, a prominent company from Shinjuku, Tokyo, specialized in arcades and video games.

In 1994, Taito launched the first bubble shooter game ever. The game was released in Japan with the name Puzzle Bobble (パズルボブル Pazuru Boburu) in June of 1994 and was launched worldwide in December of the same year with the name Bust-a-Move in some Western countries.

It was intended as a spin-off of one of the company’s most profitable and popular games ever, the Bubble Bobble, in which the players trapped their enemies in bubbles to then pop them and remove them from the game.

Inspired by the simplicity of the original game, Taiko decided to take the concept of releasing and popping bubbles a bit further, transforming it into a challenging puzzle game.

In Puzzle Bobble, the players met once again Bob and Bub, the cute little dragons of Bubble Bobble, now in a new environment and with a different purpose. Armed with a powerful weapon, the little dragons were no longer blowing bubbles, but rather shooting them with precision against other colored bubbles to make them pop.

To make it more dynamic and challenging, time was a constraint in Puzzle Bobble. As the clock ticked, the puzzle’s ceiling would fall down little by little. The player would lose if a puzzle bubble touched the bottom limit of the game.

A two-player mode was also included, letting players compete against one another to see who could pop all the bubbles first.

The innovative gameplay and the presence of the iconic dragon duo of Bubble Bobble quickly catapulted the game in popularity in Japan and it did not take long for the game to conquer the rest of the World too.

From Puzzle Bobble to Bubble Shooter

After 1995, clones of Puzzle Bobble especially intended for computers started to appear everywhere in the world. As the name of the game was patented, these new clones played with different variations of the original name, keeping the word Bubble as a reference for players.

In 2002, Absolutist LTD launched a clone named Bubble Shooter, porting it to iOS and Android devices in 2010 and 2012, respectively. The game was met with a good amount of success.

In 2015, Ilyon Dynamics, an Israeli-based startup, acquired Bubble Shooter from Absolutist prompting an ever wider expansion of the game. With a team of enthusiasts of the original ‘90s game, the company strived to extend and improve the design and gameplay of Bubble Shooter for mobile, while also adapting it to different platforms such as Facebook Messenger and Skillz.

The timid success of this type of game in the new devices and platforms of the 21st century took a turn then, leading to an explosion of new clones and more demand by the public for such games.

From Bubble Shooter to Bubble “Shooters”

The success of Ilyon Dynamics’s game eventually resulted in the term “Bubble Shooter” being used as a general name for all the clones and as a way to distinguish them from the original version.

Bubble Shooter games are now widely spread and available for every platform, be it computers, tablets, or smartphones, not to mention video game consoles in which the original Puzzle Bobble was already flourishing for a long time.

Each developer introduces their own details to the game and even the original Puzzle Bobble followed this trend adding new features with time. You can now find Bubble Shooters with storylines, different difficulty levels, game modes, special bubbles with powers, power-ups that help you clear the puzzle, and much more.

The challenging features of the game can also change. Some games keep time as a constraint just like the original Puzzle Bobble, while others limit the shots per level, increasing the game’s strategy aspect.

Why did Bubble Shooter become so popular?

Different players may point to different reasons depending on their favorite game and its unique features. Some can be particularly drawn by the storylines, the level of strategy required, or even the beautiful designs and animations.

Nevertheless, looking back at the history of Bubble Shooter and its humble beginnings (for today’s game standards at least), we can argue that the success of Bubble Bobble and the presence of the kawaii little dragons, Bob and Bub, had certainly a role to play.

However, these factors can no longer explain why this puzzle game is still so popular more than 25 years after its first release. Especially because Bob and Bub only feature in Puzzle Bobble, but we now have countless game clones to choose from.

More likely than not, the success and appeal of Bubble Shooter games lie in the structure and purpose of the game itself.

It is simple, intuitive, straightforward, and has the right amount of challenge to it. Despite its simplicity, anyone shooting aimlessly is bound to lose. You need to pay attention to your aim, play around with the bouncing walls, choose which bubbles to pop and look out for any special bubbles that may help or crush your progress.

Yet, the game is also relaxing and addictive in equal measure. Yes, all you have to do is match and pop the bubbles, but isn’t that enough? Just like we cannot resist popping the bubbles on a bubble wrap, it is hard to stop popping the colorful bubbles on a screen too.

We have more online games for you. Play now!